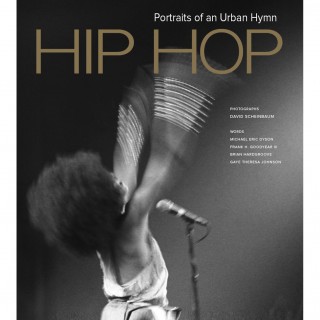 Since its inception in the 1970s, hip hop music and the culture surrounding it has become a hugely influential and popular musical form in America and around the world. Its popularity extends beyond the urban centres where it was born and pervades and influences youth culture around the globe.

Since its inception in the 1970s, hip hop music and the culture surrounding it has become a hugely influential and popular musical form in America and around the world. Its popularity extends beyond the urban centres where it was born and pervades and influences youth culture around the globe.

Although the media is full of images of hip hop stars, few artists have created serious and powerful photographs that explore the complexity of the phenomenon. With David Scheinbaum's images and incisive texts by scholars, cultural critics and public intellectuals Gaye Theresa Johnson and Michael Eric Dyson, as well as an artist conversation with Frank Goodyear Jr. of the National Portrait Gallery, plus an introduction by Brian Hardgroove of Public Enemy, this book will look at Hip Hop as a positive cultural influence that is akin to the youth movements of the 1960s in its scope.

"This is the world that David Scheinbaum captures with effortless brilliance and transcendent beauty. His images stick in the eye for their lean and muscular portrayals of bodies in motion, and for their voluptuous characterizations of mouths in movement. He catches speech the moment it spills from lips fixed around sentences that rush in staccato fury or fall back in asymmetrical repose. Scheinbaum's aesthetic voice and visual language speak through images that zing, blur, haze, identify, splatter, brush, clarify, and even coagulate like celluloid blood on fleshy surfaces. If renowned photographer Roy DeCarava famously shot the sound he saw when Coltrane blew his horn, then David Scheinbaum shoots the music he tastes when his eyes are hungry for poetic truth. If hip-hop artists are ghetto deities born to fly the artistic coop and soar to the musical heavens and back, then Scheinbaum is one of their most faithful chroniclers, recording their ascent and return one gesture, one image, at a time. To paraphrase the holy book: In the beginning was the word, and the word became flesh and spoke among us through pavement prophets. What they said is on record; how they looked when they said what they said is on record, too. Turn these pages and see."
Michael Eric Dyson, from his essay Word, Words, the Word

"History has shown that hip hop can be as demoralizing as it is powerful. The social problems and internal tensions that plague it can feel overwhelming at times. We have to rewrite the story we've been told about who we are and about our value to each other. There are places, as the work of David Scheinbaum demonstrates, where humanity, dignity, and beauty still exist, still thrive, still inspire. Scheinbaum has captured these moments, and they encourage us to rediscover the most important and moving possibilities that hip hop has to offer. Hip hop began as a desire to represent communities of color - the true, the ugly, the beautiful - with equity and humanity. These photographs help us reconnect to the freedom dreams of hip-hop's creators and to the desire to have those dreams met with equity and social justice."
Gaye Theresa Johnson, from her essay Beyond the Phatitude: Why Hip Hop Exists