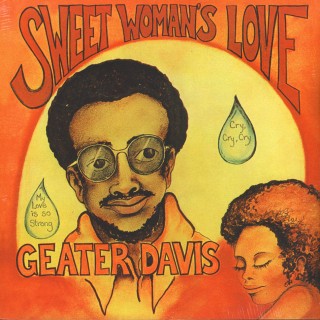 Davis was born in Kountze, Texas, the youngest of five children born to the late DeWitt and Cornella Davis (1908–1996). In the late 1960s he was heard performing, along with Reuben Bell, by record producer Allen Orange. Orange arranged for them to record in Birmingham, Alabama, and started his own House of Orange label to release their output. Geater's first release, "Sweet Woman's Love", in 1970, reached # 45 on the Billboard R&B chart. His follow-up singles on the House of Orange label, including "I Can Hold My Own" and "Best Of Luck To You", were less commercially successful, but he recorded an album, Sweet Woman's Love, which is now considered a classic of the deep soul genre. He often wrote or co-wrote his own material.

After Orange closed his label in 1972, Davis recorded for the Luna label, and then for John Richbourg's 77 label, where several of his recordings such as "I'm Gonna Change" and "A Whole Lot Of Man" were made at the FAME Studios in Muscle Shoals. His 1973 single, "Your Heart Is So Cold" reached # 64 on the R&B chart. During his career, Davis was often compared to fellow blues singer, and good friend, Bobby Blue Bland, because of their similar voice and vocal styling, but Davis' vocals were heavier and darker in tone. Also, Davis played guitar in the studio, as well as live, something Bland did not do. However, Davis' records did not generally sell well, despite heavy touring on the blues and chitlin circuits.[1] He recorded for the Ace label in the mid 1970s, and later issued some disco singles on the revitalised House Of Orange label. In 1981 he joined the MT label run by James Bennett in Jackson, Mississippi, which issued several singles and an album, Better Days.

Davis died of a heart attack in Dallas, Texas in 1984 at the age of 42. Leaving behind his wife Lula Davis his two daughters Vernecia Davis, Laquita Davis and stepdaughter Sandra Darby In 1985, as a tribute to his friend, Bobby Blue Bland re-recorded two of Davis' most popular tracks on his Members Only album, Sweet Woman's Love, and I've Just Got To Know.

In 1998, West Side Records released Sadder Shades of Blue: The Southern Soul Sessions 1971–76, a compilation covering most of his recordings other than those for House of Orange. His remaining material, I'll Play The Blues For You: The Legendary House Of Orange Sessions, was released in 2008.